“Having A Bad Day? Are You Feeling Down? Help Someone: Part One

Is your path littered with hard circumstances today? In my upcoming book, you will see this life lesson my Mama taught me is just what you need! If you have not read Part One, (linked above), please read it first. 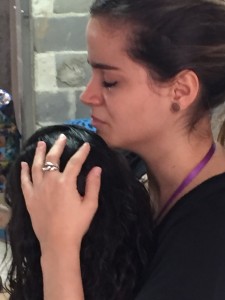 Tragically, Hurricane Katrina and the broken levies had just flooded New Orléans. In the nearby Boots Ward Recreational Center, there was a Red Cross shelter, a safe haven for some of the Katrina evacuees. I drove straight to this center and found out that there was a volunteer position available for the following Monday, 6-10 a.m.

As I signed up, I felt the sadness start to ease.
On that Monday,  I arrived at my appointed time, unaware that someone would be placed in my path who would change my life. I soon met Sarah L. Johnson, a Katrina evacuee who had resided in New Orléans her entire life. Sarah was 85 years old, had never married, and had no children. Funny, she said she had always wanted to visit Atlanta, but didn’t realize she would come like this. The story of how she got here is a story in and of itself. After the initial evacuation, though there was a power outage, Sarah and her fellow residents returned to their apartments. When she heard banging on her door, she glanced out the window only to find that the water was rushing into the streets and rising rapidly. We now know that the levies had broken down, but at that time, the residents had no idea what the rushing water was from. They hurried to the roof of the building where they stayed overnight until a helicopter could pluck each one of them off the roof. When boarding the helicopter, in all the confusion, this 85-year-old woman lost her walker, her glasses, her shoes, and worst of all Sarah found herself separated from a friend who was holding all of her IDs for her.

'One who gains strength by overcoming obstacles possesses the only strength which can overcome adversity.' Albert Schweitzer

Sometimes our greatest disappointments are God’s appointments, a chance to bless another person’s life.  A friendship soon developed with Sarah which would change my life for evermore.
When I first met Sarah, she was just waking up in the Red Cross Shelter. I helped Sarah with her laundry, got her breakfast. She talked with me about her strong faith in God and how surely God had a plan for her even in this crazy situation. Feeling more encouraged, at the end of my shift, I gave her a hug, thinking I’d never see her again this side of heaven.

A few days later, I received a phone call from my friend, Vicki, who had worked at the same shelter, telling me that Sarah needed to see a cardiologist and could I help her to get in to see someone. I had the privilege of taking her to a doctor the very next day. Her heart was just fine and this was the beginning of a sweet friendship, one that I will forever cherish. After four weeks at the shelter, Sarah moved to a wonderful nearby assisted living facility where even though she was the only African-American woman there, she felt love and acceptance from the staff and the  other residents. She visited my weekly Bible Study at my friend, Sara’s home,  worshipped with us at our church and even gathered at my sister’s home for a huge family lunch!

'Always seek out the seed of triumph in every adversity.' Og Mandino

Sarah Johnson shared her heart with me and told me why Psalm 27 was her mainstay scripture. Mama and I took her to the Martin Luther King Center in Atlanta, and she told Mama and me all about her personal and vivid memories of the Civil Rights Movement.
Later, Sarah was happily returned to New Orléans to her same first floor apartment. I believe that our God gave me this opportunity to serve and help Sarah during a time when I was experiencing a broken heart over the loss of my precious friend, Jil.

Are you feeling down and going through a great disappointment today?? If so,  look up and all around.

Watch for the divine appointment that is waiting around the corner for you to become an uplifting messenger to someone today.
My older brother, John Wade, recalls how Mama was a great listener, who could easily empathize with troubled souls who fell in her path. Mama and Dad joined the local organization of “Parents Of Marines”, providing both comfort and support to those parents whose sons died or became severely wounded during the Vietnam War, which John Wade fought in. They continued this support even after John was honorably discharged from The Marines to begin college. Kathy remembers how Mama taught us to always look people in the eyes when speaking with them, and always be on the look out for ways to serve.

I am so thankful to our Mama for teaching this important tool for moving forward when things seem impossibly hard. I use this tool often, and I hope you will, too!

Posts You May Have Missed:

5 Reasons We Should Volunteer

My Own Little World

Joy Comes In The Morning

We Are Called To Be Brave