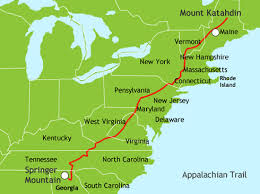 Call me crazy, but I have Appalachian Trail Dreams… dreams about climbing part or all of The AT …starting in Georgia and plowing through the states one-by-one, all the way to Mount Katahdin in Maine. My friend from high school, Del Wynne recently posted an AT contest where her friend, who is like a niece to her, Gina was one of the final 12 finalists out of 74 entries. When I clicked on to watch Gina’s video, and to cast a vote for her, I took a few minutes to view the other eleven applicants while I was there. I found them each one so intriguing and it has lit a small flicker on my dreams to one day hike part or all of The Appalachian Trail. Click here to view the inspiring finalists in The 2016 Badger Sponsorship Contest, and consider voting for Gina or another favorite. Voting ends at 10:00 p.m. on January 31, 2016. 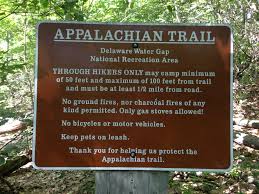 The Appalachian National Scenic Trail, generally known as the Appalachian Trail or simply the A.T., is a marked hiking trail in the eastern United States extending between Springer Mountain in Georgia and Mount Katahdin in Maine. [pullquote]The moment our memories are greater than our dreams we are dead in the water.” Dr. Ike Reighard [/pullquote]The trail is approximately 2,200 miles (3,500 km) long, though the precise length changes over time as parts are modified or rerouted. The trail passes through the states of Georgia, North Carolina, Tennessee, Virginia, West Virginia, Maryland, Pennsylvania, New Jersey, New York, Connecticut, Massachusetts, Vermont, New Hampshire, and Maine. The path is maintained by 31 trail clubs and multiple partnerships, and managed by the National Park Service, United States Forest Service, and the nonprofit Appalachian Trail Conservancy. The majority of the trail is in forest or wild lands, although some portions traverse towns, roads and farms. The trail conservancy claims that the Appalachian Trail is the longest hiking-only trail in the world. The Appalachian Trail is famous for its many hikers, some of whom, called thru-hikers, attempt to hike it in its entirety in a single season. Others have managed to perform a “round-trip” of the trail where they thru-hike from one end to the other and then turn around to thru-hike the trail the other way, otherwise known as a “yo-yo”. Many books, memoirs, web sites and fan organizations are dedicated to these pursuits. (from Wikipedia)

What are your dreams?

It is always good to

I may not yet have plans to climb The AT, but I am going on a short trip in early June 2016 to climb Mt. LeConte in The Great Smoky Mountains with three girlfriends. The distance to LeConte Lodge is 5.5 miles and a net climb: 2,560 feet. We will stay over at The Lodge before hiking down the following day. I was able to do some scenic hikes in August 2015 in The Rocky Mountains and blogged about it here and here.

As long as we have breath,